I, amongst many people, have mobile devices filled with apps of all kinds. We have weather-apps, to-do’s, social networking, mail and games, lots of games. Some are paid and others are free. But when is a mobile game worth it’s price?

Two days ago I bought Feed Me Oil 2.

First of all, it’s a great game, you should get it! Awesome graphics and an enjoyable game style. Today I completed all the included levels, obtained all possible stars and I didn’t use any in-game help. It cost me 19DKK ($2.99) and took about 4 hours to complete.

Some would say this is a low price for 4 hours of entertainment, and I agree. Sure there was only four “islands” included, each with 15 levels and a 180 stars in total. 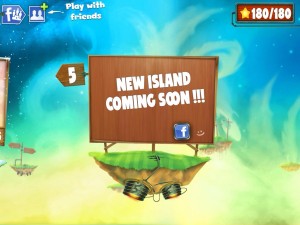 But there’s a teaser for a fifth island included in this release. When that island gets released in a future update, I’ll be able to put more hours into the game, at the same initial cost.

My investment will be worth more hours of entertainment down the road.

Price per hour of entertainment.

When people rage about the price of mobile games, they always seem to forget the world we live in – or used to live in – all you could get for $1-$10 just 5 years ago, in terms of entertainment, was a set of cards, a board game or an old/used video game.

I’ve paid up to 500DKK ($91) for a max of 20 hours of entertainment, unless you count in replay-value. But let’s face it, you don’t want to replay a game you just finished, unless it was really, really good! That’s a bad investment if you compare the price/hour.

On the other hand I’ve also paid such a high price, for a game that lasted weeks, in terms of in-game-hours (GTA V) – A good investment indeed. But how good is that investment, if you compare it to a game like Angry Birds. It’s inexpensive and comes with an immense amount of content, making it last very, very long.

Some would say Angry Birds is the best investment of the two. I won’t agree nor disagree, it’s a personal matter. I really enjoy playing a bit of Angry Birds while having breaks, but I also enjoy being sucked into the huge world of a console game, and spend endless hours exploring and progressing.

Stop raging about app prices, and just enjoy what you’re getting from your hard-earned money!
Game developers need to make a living, regardless of the platform they’re creating their game for. If you can’t spend a few bucks on mobile games without feeling the need to rant about it, you probably should consider spending your money on something else.

Did you feel the urge to try Feed Me Oil 2? I highly recommend it!